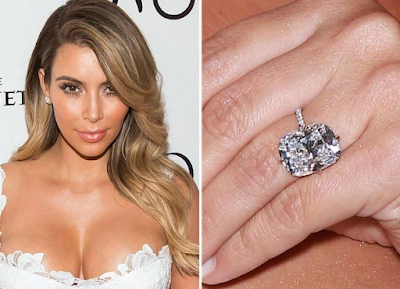 Reality TV star Kim Kardashian is reportedly blaming herself for the much talked about robbery incident she experienced on Sunday where $11m worth of jewelry was taking from her while she was gagged in the Parisian apartment.
Kim doesn’t want her husband and father of her two kids, Kanye West to replace the $4m ring the robbers took from her, according to reports by People.com,
She has been pointing fingers at herself and taking the blame for showcasing her ring on social media since returning to the United States and being reunited with her children in New York.

“Kim’s in shock and blaming herself. She’s tearing herself up that she Snapchatted the ring so much and wore it all the time. This incident is making her question everything. How she dresses, what she does,” a source close to the Kardashian family tells PEOPLE.

“Kanye wants to buy her the ring again but she just says she doesn’t want to think about it. He says he wants everything to go back to normal and for the incident to not affect their lives,”

HOW TO RETRIEVE YOUR MONEY AFTER YOU HAVE BEEN SCAMMED.

HOW TO RETRIEVE YOUR MONEY AFTER YOU HAVE BEEN SCAMMED.