Don't Miss
Home / NEWS / Midfielder Luiz, leaves field in tears after being the victim of racism with rival fans making monkey noise at him

Midfielder Luiz, leaves field in tears after being the victim of racism with rival fans making monkey noise at him

28-year-old Everton Luiz, Partizan Belgrade’s midfielder, was left in tears after being racially abused by rival fans during a game against local rivals, Rad. All through the game, Rad fans kept making monkey noises each time Luiz was with the ball.

At some point during the match, the Rad fans unveiled a banner with content which was insulting to Luiz, causing the game to be halted and a warning issued, however, this did not deter the racist fans who continued with mocking the Brazilian star. 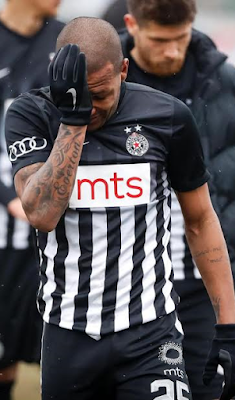 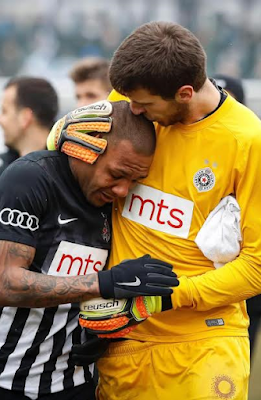 By the time the game was over, Luiz couldn’t take it anymore and he made a one-fingered gesture at the rival fans as he left the field, crying, in spite of the fact that his team, Partizan, won the game 1-0.

A teary Luiz revealed to reporters that he suffered abuse all through the match and that upset him, but what was more upsetting was that home players supported it.

He was eventually consoled by his team’s goalkeeper, Filip Kljajic. Partizan coach, Marko Nikolic, hinted that Luiz was likely to face disciplinary action for the way he reacted to the racist abuse, though he acknowledged that Rad fans were at fault and should also be punished. Nikolic said:

“Everton should not have reacted but something provoked his outburst, didn’t it?”

Buhari Meets with the wrong Nigerians in South Africa (Pictures)